Главная » Ballet in the Dirt: The Golden Age of Baseball 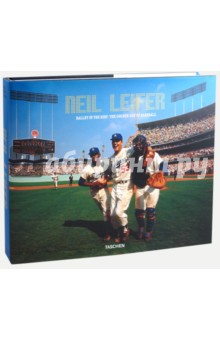 Ballet in the Dirt: The Golden Age of Baseball

Отзывов: 0  |  Написать отзыв
Описание Отзывы (0)
"Neil's book has some of the greatest photos you'll ever see, even if you've seen them before." - Yogi Berra This superb collection of 60s and 70s baseball images commemorates the sport's finest moments via the lens of legendary sports photographer Neil Leifer Professional baseball of the 1960s and 1970s belongs to Neil Leifer, the premier sports photographer of his generation. In 1960, at age 17, Neil had the human drive to match his new Nikon motor drive and he was on his way. With gumption and an eye for the decisive moment, the baby-faced kid from Manhattan's lower east side was soon selling his photos to Sports Illustrated. This superb collection of images reflects the total access Neil had to the players on the ball field, in the dugout, and in the locker room. All the pathos, elation, disappointment, and celebration are etched upon the faces of the players and their mercurial fans. From the 1960 World Series between the Yankees and the Pirates-decided in the 9th inning of the 7th game by a Bill Mazeroski home run-to the 1977 Series between the Yankees and the Los Angeles Dodgers, Neil Leifer never stopped shooting. He was up in the nosebleed section of the grandstands in Yankee Stadium, in the rafters of the Astrodome in Houston, or a helicopter high above.Who won the games wasn't important-only how the game was played. The blood, sweat, and grace. It's all about the game, and Leifer's photographs create a topographical map to the very heart and soul of baseball. Featuring over 300 photos, the book is divided into four chapters: The Game; the Heroes-like Roberto Clemente, Mickey Mantle, and pitcher Sandy Koufax; the Rivalry (infamously, between the Yankees and the Boston Red Sox and the Giants and Dodgers); and the World Series championship. Limited to 1,000 copies, each numbered and signed by the photographer. About the artist: Native New Yorker Neil Leifer began photographing sports events as a teenager. He has shot over 150 covers for Sports Illustrated, published 13 books of his photographs, and held the position of staff photographer for Time magazine. His Muhammad Ali boxing images played prominently in TASCHEN's GOAT- Greatest Of All Time. About the editor: Eric Kroll edited several titles for TASCHEN including Natacha Merritt's Digital Diaries and The Wonderful World of Bill Ward. His photography was the subject of TASCHEN's Fetish Girls and Beauty Parade. About the contributing authors: Gabriel Schechter, a lifelong sports fanatic who idolized Willie Mays, Johnny Unitas, and Oscar Robertson, is a research associate at the National Baseball Hall of Fame. He is the author of four books, including This Bad Day in Yankees History. Writer/director Ron Shelton played second base in the Baltimore farm system for five years before making films including Bull Durham, White Men Can't Jump, and Cobb. He is currently working on Our Lady of the Ballpark, a film about the Mexican Leagues. Издание на английском, французском и немецком языках.